James Swan was born in Kirkmahoe, Dumfriesshire in 1839. He served his time as a hewer/mason at Locharbriggs Quarry near Dumfries, before moving to Kirkcudbright in 1860 to work for Wallace & Co builders. Noticing that there was an opportunity to supply and renovate memorials he founded a memorial masonry business next to the old Life Boat Station at the Creekhead in the name of James Swan, Monumental Sculptor. This is the business which has evolved into the Douglas Swan & Sons of today.

John Swan his son, was born in 1870 and eventually followed in his father’s footsteps carrying on the business after the death of James in 1905, changing the name of the business to John Swan, Monumental Sculptor.

John had two sons Jonathan and Douglas who were both trained and continued in the business, which became John Swan & Sons. John died during the Second World War in 1943 leaving the two sons to return from the forces and carry on the business. The brothers decided to part Company in 1957, Jonathan carried on trading as Jonathan Swan Monumental Sculptor at Creek Head while Douglas set up Douglas Swan Monumental Sculptor in St Cuthbert Street where the business is located today. Sadly Jonathan died in 1961 leaving only the business of Douglas Swan to carry on the family name. Douglas junior joined his father in 1970 and in 1974 the firm became Douglas Swan & Son. Ian the younger of the two brothers became a partner in 1980 and the current name of Douglas Swan & Sons was established. Douglas senior died in May 1982.

Ian’s elder son Jamie started work in the family business in 2003 making him the fifth generation of Swans to work in the memorial masonry business in Kirkcudbright and became a partner in the fim in 2012. Ian’s younger son Garry is also working in business at this time.

The family are very proud to be the oldest established family business still trading in the ancient burgh of Kirkcudbright. In December 2003 the family completed the re-building of the premises they have occupied since 1957 and opened their new showroom, workshops, design studio and office complex. 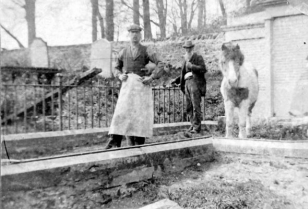 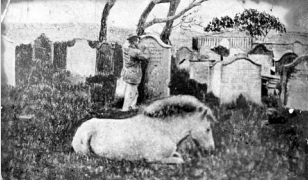 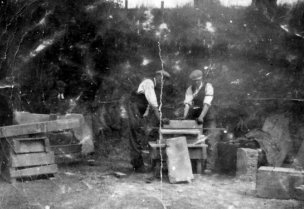